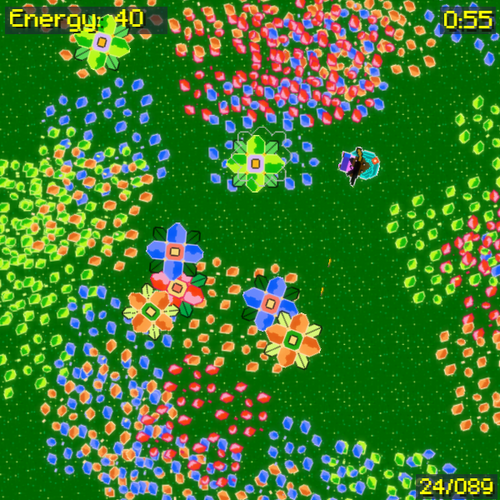 So, I finally updated the game! Here's the long changelog:

- changed return to main menu button from Enter to Q

- navigating back to main menu from credits / information changed to any mouse button, instead of Enter

- reload is done with the right mouse button

- when not firing, Flanigan's movement speed goes back to normal

- firing the gun will have noticeable recoil

- flowers also have recoil when hit

- energy replenished bumped up to 30 units from 25 units

- spawn limiter placed on flowers in order to ease framerate

- flowers are no longer killed in one hit, each has hit points

- spawn locations are now randomized for both flowers and items

- a flashing flower outline now shows where flowers will spawn

- every time a game starts, a track is randomly selected via a number generator

- once the track ends, the number generator resets and selects another song (sometimes the same song)

- Flanigan's flashing when hit toned down

Get death by flower arrangement

There is nothing but you and your AK-47, and mountains of freshly cut flowers.